Investing in the education of Youth in Kenya has a far-reaching, exponential impact on the future of the people and the country. 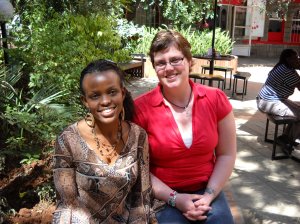 Pauline was accepted by Our Kenyan Kids for a sponsorship at The Catholic University of East Africa in August of 2006 and graduated in 2010. The third of eight United Nation’s Millennium Goals for the African Continent to be met by 2015 is to “Promote Gender Equality.” Pauline feels very strongly about making a difference in her native Kenya, as a woman, in a society that is still largely patriarchal. The fate of the “girl child” as she puts it, is very important to her. Without a University degree Pauline’s voice will not be heard, but there are far better chances if she can point to a parchment. Pauline spent the better part of a year with World Canada Youth. After her volunteer time in Bracebridge, Ontario, she has returned to Kenya with even greater resolve. Our Kenyan Kids had committed to assist her with her tuition and living expenses (beyond what she herself could contribute) at about $4,000 a year (for 4 years), through the generous support of sponsors. This is a long-range investment in the development of Kenya by investing in one of its passionate young women.

Sammy has graduated from Premese Africa Development Institute with a Diploma in Social Work and Advocacy, which was sponsored by Our Kenyan Kids. Sammy subsequently went on to provide extensive volunteer work for Our Kenyan Kids.