Posted on February 5, 2018 by ourkenyankids

Amazing Grace was our last project to visit, on our list. We left our hotel at 9am and spent the day there, not returning back until almost 10pm at night. Unfortunately, a huge chunk of the day was spent stuck in traffic as the project was moved to a Saturday – when traffic is at its worst.  Lesson learned.

All (but one – who is new) of the children remembered us and greeted us gleefully upon our arrival. Margaret was tucked away in her office with her brand new baby girl, but soon appeared in the doorway, welcoming us in. Her little one is only one month old and she herself is not supposed to be back at work just yet, but would not allow her Canadian friends to drop by without being there to greet us.

After a brief “catch-up” session, Margaret walked us through the events of the last 9 months, since our last visit. She gave us a rundown on the good and the bad and unfortunately the biggest issue at Amazing Grace remains lack of water.

She was lucky enough to have received a generous donation from a company in California who not only drilled her a bore hole, but also erected a generous sized greenhouse. However, that said, the bore hole is no good with a  water pump and part of the deal was that they would do the bore hole and she was responsible for finding funding for the water pump to complete the well. The cost of this pump is astronomical.  ($9,768.00 – $12,210.00 CANADIAN dollars). I emphasize CANADIAN dollars in capital letters as that seems to be one of the most frustrating parts of our visit this year – making everyone understand that one U.S. dollar is NOT equivalent to one Canadian dollar.

Our organization is not big enough, strong enough or certainly not wealthy enough to fund this project. However we are hoping that with the help of some new donors, and possible one or two other organizations chipping in – together we can make this happen. 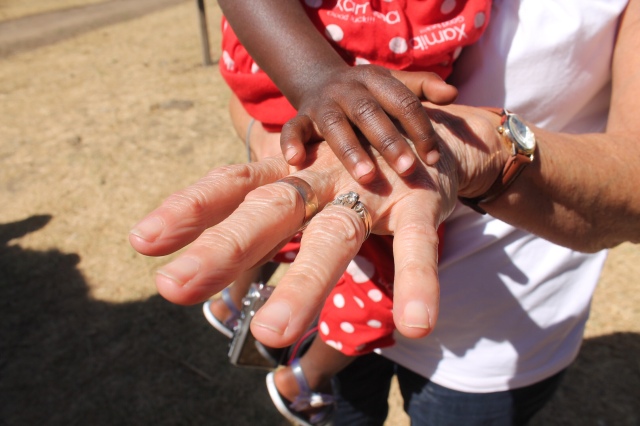 Once the well is in place, they have been given approval to open a water kiosk, enabling them to sell water and hence make some income off out of the surplus water.

The water issue is really just one end of a double edged sword. You see, with the severe lack of water, there is also a serious lack of food. If the pump could be installed, not only would it allow them enough water for their own consumption, but would allow them a way to earn income as well as solve their food shortage problem as they would be able to grow their own and not have to purchase it.

We won’t even touch on the fact that with the political upheaval of this past 6 months, food costs have tripled.

There is a new addition to the Amazing Grace family and I’m happy to report that this young lady has not come to the home out of an abusive relationship, but rather was in the care of an elderly grandfather who could not adequately care for her. She is not only now in the loving hands of Margaret and the others at Amazing Grace, but a relationship with her grandfather will remain as he has been granted visitation rights, allowing this young lady to grow up in a stable environment and still remain close to what family she has left.

All twenty-two children have successfully passed their exams and moved on to the next level. They are all happy and healthy and the one child who is HIV positive is under doctor’s care, and doing magnificently. Three of the children are moving forward after completing high school and Margaret is in search of sponsorships so that these children can remain in school and receive an even higher education, allowing them to excel.  Two would be going to Polytechnic school which runs approximately $400 USD for the first term, $250 USD for term two and $150 USD for term three (and this would be for a two year course).  The third child is looking at college, where the cost would be a wee bit lower.

One of her girls will be going into high school this year, and Margaret is also searching for sponsorship for her as well. Cost of high school is 4500kes ($55 Canadian dollars) as well as some funds for back to school shopping.

1. Water pump – this is the most important issue.

2. School fees – three for secondary education and one for high school

3. She continues to search for a car, to enable her to get children back and forth to hospital, court and other errands.

Amazing Grace Children’s Home opened in 2009 and has been making great strides ever since. Thirty-six children have moved on, having benefited greatly from their experience there. It is because of her astounding efforts and donations from some very generous donors, that these children have had the opportunity to make better lives for themselves.