Headed out this morning about 10am for Gathaithi Home for Orphans and Vulnerable Children and thankfully did not hit any traffic, allowing us to arrive by 11am.  The school was loud and alive with singing and dancing and drums and flutes as Simon had arranged for a multitude of talent to entertain us for the day.

Patricia greeted us and we headed inside to get the business of the day taken care of before anything else. However, Simon kidnapped me before I chance to even sit. He had a classroom full of students who had been anxiously awaiting our arrival and needed to be greeted immediately as they were heading out. 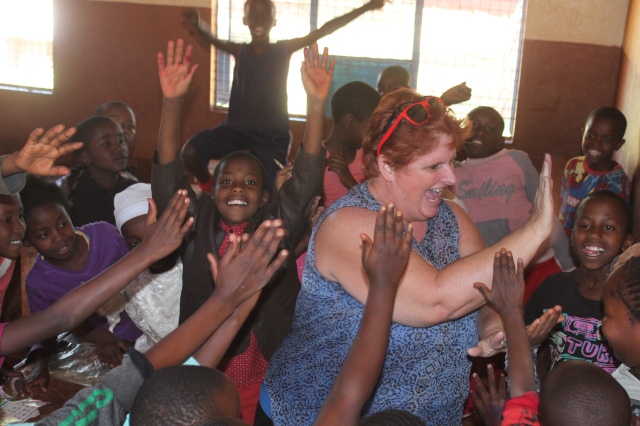 I returned a few minutes later and we spent at least an hour engaging with the Gathaithi Board of Directors, discussing the events of 2017 and their hopes and dreams for 2018.

Last time we visited, they were extremely excited about a new and almost completed well water project. Their hope was to be able to produce enough water, to bottle and sell and this would help to create income for them. However, when the project neared completion, the neighbor, who owned the actual property on which the well was situated, reneged on the deal and took the well for themselves, allowing Gathaithi only a small access to water, merely enough for washing.  Saddened by this unfortunate turn of events, most would be devastated. The staff and volunteers at Gathaithi however have looked past the negative and moved on, with bigger and better – and smarter ideas for the future, wasting no time on regrets or anger. Manager Patricia adds, “That’s part of life, we don’t complain.”

Our Kenyan Kids currently supports 91 children in total at this project. Ninety-one on site and four in colleges and transition.  There are forty-five in primary school, seventeen in boarding school and the remaining ones are on site.

What Gathaithi hopes to provide these children with is:

They are sponsored by local churches, have self help groups, and the government will chip in with small bursaries for high school fees. Primary school is free, but high school is not, and most cannot afford it. They do everything they can to help offset costs so that they are not solely dependent on donors, but working diligently toward self sufficiency.

Their most successful efforts have come through three particular fundraisers each year. In April of each year, they have a 25km walk. Neighbours, friends, family and anyone they can reach, will make a donation – much the same as we would hold a walk-a-thon fundraiser. Last year, they raised 300,000 Kenyan Shillings ($3610.85 Canadian) from this event.

Their dedication and positivity gives us great joy.  Set  backs are not something they focus on, but rather, they live to see the positives; to be good people,  to be good to one another and to live and to learn.

Currently they are running a dairy program. They have one cow, and three heifers. The one dairy cow produces enough milk to supply the school with all of their needs PLUS allowing them to sell up to 25kg of milk per day which in turn helps them to feed the children and supply enough grains to feed the cattle. Milk is currently sold to 5 neighbouring schools as well as members of the community. They are hoping to have three milk producing cows by year’s end.

Their next Endeavour is to begin a tailoring business through the school. Students will produce uniforms for children at the neighbouring schools, and hopefully down the road, even more. In order to be able to accomplish this task, they will need supplies to get it up and running and are looking for donations of sewing machines, (5 different types of machines – two of those being sweater knitting machines, and sewing machines). This not only helps to teach their own students advanced sewing techniques, but also allows them to create an income.

They have recently been nominated as the Best Children’s Home in the country and because of such elite title; the government recently rescued 6 children just last month and brought them to Gathaithi.

They are still actively running the only jiggers program around and have just this month treated two new cases successfully.

After our update, we were given a short tour and then entertained by the children, and by visiting children who were all ecstatic to see us.

The greenhouse, which was donated by “Maitland Garden of Hope” is suffering a wee bit due to lack of water, however as you will see from the photos, it is in the process of re-growth thanks to a recent replanting. They are currently brainstorming ways to increase water supply so that the greenhouse may flourish all year round.