Flight Crew – Day 3 with The Grandmothers

Posted on April 5, 2017 by ourkenyankids

Every year, telling the story of the grandmothers is by far the most difficult to share and despite how many times I write it and rewrite it, I fear that I am just not getting the message across as clearly as it need be.

We begin our “grandmother day” with a visit to St. John Ambulance in Embu. Today we were greeted by the entire board, rather than just Nelson – who is our primary contact. We began with a full board meeting at the Doris Coons Centre in Embu, discussing the events of the last year, the plans for the future and the issues arising that they hope Our Kenyan Kids will be able to assist with. The board is very kind and welcoming, sharing with complete transparency, disclosing not only the positives, but the negatives as well, ensuring that we will be able to work together to find solutions to overcome the difficulties they face. 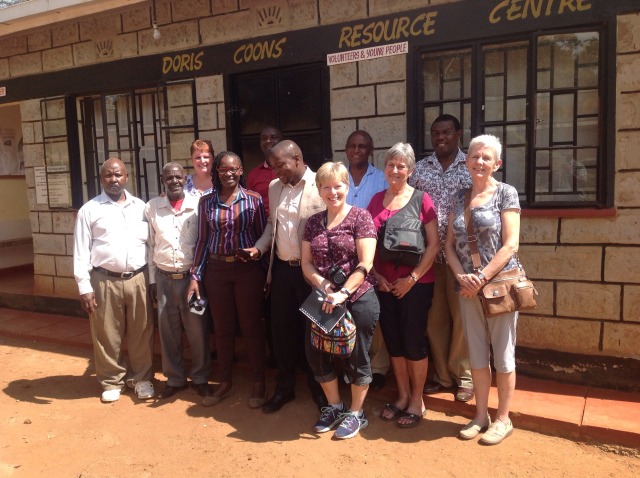 Our first stop following our meeting is the fruit and grain market. There we purchase enough beans and maize to give each of the grandmothers their own bag. This is a gift to the grandmothers made by the travel team on behalf of OKKids each year. After our trip to the open market, we visit the Nakumat (grocery store) to attain yet another gift for each of the grandmothers, this one on behalf of the travel team. This year, we had already packaged toothpaste, floss and smaller items to donate but knew we wanted to give them a special treat. We had all thought how wonderful a little bag of candy would be for each but upon arrival at the Nakumat we discovered there was none… In hindsight, we would discover a much better treat. Nelson encouraged us to buy each of them a loaf of bread and a small container of milk. Seemed wise, we all agreed, the team purchased, splitting the cost equally among us and headed to the first group.

As always, we were greeted with open arms and huge smiles. Mother Margaret was at the roadside waiting for our arrival, the smile beaming from ear to ear. Mother Margaret was OKKids first recipient of Selenium.  Selenium is a nutritional supplement that has proven most successful in HIV patients. It is an immune booster and the results that we have seen, from the recipients taking this medication is staggering. The supply of Selenium comes from our partner Paul Willis from a pharmaceutical company in the United States – which is currently opening a plant in Uganda – which will make the steady supply much more successful. Without selenium, those that are HIV positive remain very ill. With it, their health is visibly improved, they are able to live a normal life, maintain a healthy weight and all round physical condition.

We could clearly see that each member of this first group was looking and feeling exceptionally well despite the challenges they have faced of late. The terrible drought in Kenya (not a drop of rain in the last 5 months in a very hot country) has caused monstrous problems with dry wells and no crops. The ground is hard and cracked, the dust fills the air in every region and this group of grandmothers is truly feeling the strain. The food they would normally produce is not only used to feed their own families, but also to sell at market, and without the rains, they are facing unimaginable hardships.

Among the small group that gathered was a father and his young daughter. His wife and other three children were not present. We were given a tour of their home. This heartbreaking moment was one none of us will soon forget. A tiny 6×8 shack, with holes throughout the roof and walls, a dirt floor, one bed, cluttered with their sole possessions including a cage for their chickens each night was home for 6 people! There is just no way for anyone to truly imagine this, without having seen it for yourself. We were devastated that this man and his family had so little.  Yet he, and each of the others, not only welcomed us with open arms, they shared their stories, they laughed with us, they proudly showed us all that they had and humbly asked us to keep them in their prayers and help however we could.

The second group of grandmothers was a short ten minute drive down the road. This group has been actively involved in doing bead work, making purses, wallets, necklaces, etc to sell at market. They support each other by sharing livestock such as bunnies and goats. They had also hand knit baby outfits that they sell at market and also brought to our meeting today for us to purchase and in doing so, support them. Again, the biggest issue was the drought and lack of water which made providing for themselves impossible. They are a very proactive group but need assistance with funds to get new projects, such as soap making, up and running.

The third group of grandmothers were also awaiting our arrival by the side of the road. They greeted us with song and continued to sing and dance as we followed them along a short path and onto the yard (and I don’t mean green grass and shrubbery) where we all pulled up a plastic outside chair and began our short meeting. During these meetings (with each group), everyone introduces themselves, shares the stories of the last year, the good, the bad and everything in between. Almost before we started one grandmother looked me straight in the eye and declared, “I’m hungry!” Jokingly I told her to hold her horses and carried on with what I was doing. Only moments later we distributed the grains, beans, bread and milk that we had purchased and were flabbergasted at the speed with which they actually ate.

These people were quite literally starving.  The lack of water and lack of livestock has truly made their lives near unbearable, and yet their concern was not for themselves, but for one more grandmother, who belongs to their group and is currently in hospital having been recently diagnosed with ovarian cancer. One can almost be certain that her selection of treatments will not be nearly as aggressive as what someone in North America would have.

The journey back to Nairobi was a somber one as it always is after a day of visiting the grandmothers. Such strong, independent, smart men and women, and yet they are faced with such unbelievable challenges each and every day. We know there is so much more that we should do for them, but we are just a small group; we need your help to help them.